Vesta, The Guardian of helpless species, is completely smitten when he’s assigned to take care of the unconscious and ovulating human friend of Kele Frey. A brilliant idea erupts. Get her with child, and she’ll be forever his.

Bay Walters wakes up to the most amazing man she’s ever seen. She gives in to her wild side before she discovers he’s the kindest, most loving soul ever. He certainly doesn’t deserve the entrapment she’s doled out with her pregnancy.

Now that a threatening alien species has emerged, he’ll have the most important Guardian job of his existence.

Who’d expect a redhead to have chocolate eyes? Vesta stared at the woman who’d just woken. Kele’s friend was beautiful. So delicate and…ovulating. Why that stuck out in his mind was beyond him. But it was what Diamond—The Enforcer—had mentioned when Vesta stepped out of the medical room carrying Bay in his arms. Diamond had a gift of smell.

“You are a beautiful woman, Bay Walters. I didn’t expect your eyes to be that shade of melted chocolate. I expected blue or green.” The Earth people had odd-colored eyes, very muted. It was an interesting effect. It made the rest of their features stand out. Instead of noticing gem-stone eyes, you noticed the Earth women’s kissable lips. Delicate cheekbones. Perfectly arched brows. And the golden, fiery copper tone of her hair. He was completely smitten with her.

“Your eyes are beautiful, too. Yellow. I’ve never seen anyone like you.” The human whispered. “I thought I had amnesia and forgot who you were, but that you might be my boyfriend,” she admitted.

He couldn’t help but smile.

Suddenly her mood mellowed, and her eyes became haunted. He wanted to her to be happy again. He knew what she thought of. The entire reason why she’d been brought here. Her friend, Kele’s, death.

“Please, don’t be sad. I promise your friend is all right. You may not believe me, but I can’t stand to see you this way.”

He reached out to brush his thumb against her cheek. Her lips parted as a sigh escaped.

“You’re asking me? It’s not like I asked you before I just jumped in.”

He smiled. “I didn’t mind you kissing me.”

“And I don’t mind you kissing me.”

“Forget about everything but me,” he said. “There’s just the two of us right at this moment. You like my eyes. You’ve never seen anything like me, a Stargazer.” He reached out and caressed her jaw line to her cheek. “You’re such an attractive human female. Your beautiful chocolate eyes and fiery hair together are amazing.”

His lips brushed hers, so soft and warm. He tried hard to be tender, to show her he could set aside the Stargazer strength and not hurt her. He was very aware of the differences in build between them. She was tiny and delicate. Hell, one of his biceps was the size of her entire head.

He opened her mouth with his lips and his tongue delved inside. She tasted like cinnamon, spicy and hot. He deepened the kiss as her hands gripped the bulk of his shoulders to keep steady, as if she needed something to cling to. Then again, perhaps she just wanted to feel his muscles. He had noticed where she’d been staring earlier.

The thought of that made all tenderness disappear as the kiss morphed into unbridled passion. His lust exploded as she matched him, stroke for stroke and moan for moan.

An idea hit. This tiny female was ovulating.

She would carry his young, and she would never want to leave him. 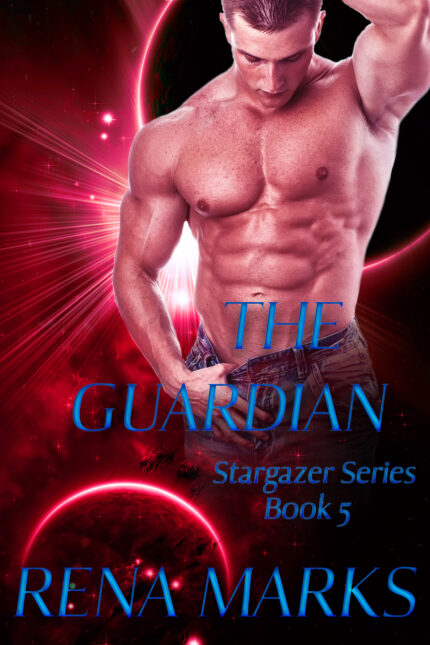