Mia Tallow has been taught to fear Stargazers by her ex-husband. However, she can’t stand what his organization, the Stargazer Abolishers, stands for. Now she’s on the run from both aliens and Abolishers. The best place to hide out is right under their noses, right outside of Realm, at a karaoke bar on the edge of town.

Jace 1298 battles a virus that runs rampant in his blood. It makes him experience volatile rages, and like a modern-day vampire, he has to drink blood to dilute the effects. He’s everything regarding alien domination and violence that Mia’s been taught.

Yet, he can’t resist stalking the sweet human female. Hell, if she’s going to fear him, she may as well have a good reason.

She rolled out of bed and headed to the bathroom to shower. When she finished, she could hear him banging around in the kitchen.

His bathrobe was back to hanging behind the door, so she slipped it on and headed for his closet. She’d have to borrow sweats and a shirt or something. She opened his closet door and stared.

She couldn’t believe what she saw.

Her clothes, all of them, hanging next to his. He’d moved her in. The audacity of the man. She dressed quickly, and smelled delicious smells coming from his kitchen. She wanted to hold onto the anger, but right now her stomach growled.

She stomped into the kitchen. “My clothes are in your closet.”

“You just don’t learn.” He turned away from the plates he’d set on the breakfast bar.

Mia froze. He leaned toward her, his burgundy eyes blazing. He cupped the back of her head and pressed his lips to hers.

He kissed her long and slow, and his tongue explored her mouth with exquisite gentleness. It was an odd sensation, to be held in an iron-hard grip, but to be kissed so tenderly. She moaned, a wave of heat surging through her body. Somewhere in the back of her mind she knew she should be worried about kissing not only a stranger but an alien. Instead, her body turned against her and she could only concentrate on her nipples beading against the softness of her blouse, and her body moistening. He licked her bottom lip, then gently bit down. She gasped, and he slid his tongue over her parted mouth.
Slowly, he pulled away. “Eat your breakfast while it’s hot, Mia.”

He sat her down, and took the seat next to her.

That was it. They weren’t going to finish this until he got his rocks off. And to be fair, she wanted her rocks off, too. She didn’t really see his erection last night, it was too dark. But she felt it, and it was plain and simply…enormous. Thick and long, and she’d bet her right arm it was beautiful as well.

That’s what it would take. A quick round of sex, and he’d be on his way, the whole mate-thing forgotten. Once she was satisfied, she’d be on her way, too. Away from both Abolishers and Stargazers.

A plan formed. It seemed every time she was angry, or refused to do something he insisted on, he shut her up with a taste of what sex would be like with him. She had no idea what it was about this stranger that tempted her, but it was a craving she couldn’t quite set aside. Obviously, she was a weak woman. So she’d quench the craving and then run again. 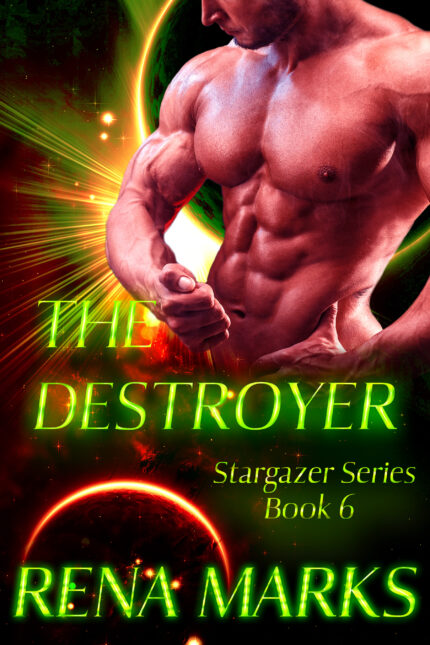