Holly Dewan has been to Hell.

Not only was she kidnapped and carried through dimensions into a strange land called Luciefyiore, she’s told she’s a breed of demon with a rare power—the ability to trigger lust.

The man who captured her is large and tight and sexy, with biceps the size of mountains. Eyes of green, with horns to match. Temptation has never been sweeter.

Ace is a bounty hunter with one mission, to bring the demoness home. But the woman has tempted him with her lush curves and long, honey-brown hair. Her lips are full, her eyes a mysterious mix of sultry innocence.

And he knows just how to trigger her wave of power—a blazing trail licked right down to her core.

“I can’t wear these! I am not wearing anything with chains. Nothing see-through. Nothing skimpy.”

Ace had the nerve to look at her like she was crazy. “Look around,” he said, with a motion of his arm. “Do you see anything else but chains, translucent material, or flat- out missing material?”

“Exactly. I’m not wearing these clothes.” She looked at the fabrics on his arm, pulling the top one off. “I refuse to wear this.” She held up a thin tube-shaped dress of skintight nude material. A body stocking. While it would cover her breasts to the bottom curve of her buttocks, it left nothing to the imagination. It was the ugliest thing she’d ever seen.

He grabbed her to him. “Look here, little girl. There are no choices. These are the clothes demonesses wear. You dress differently, you stick out like a sore thumb. It screams, Steal me! I’m the human everyone is looking for.”

Grabbing a couple more of the wispy fabrics, he shoved her into the dressing room.

“I’m not putting these on,” she warned from the doorway.

“Then I’ll do it for you.” He stepped into the door and closed it behind him, locking the knob.

“No. I gave you a chance to pick something. My patience is at an end, woman.”

His hands tugged at her shirt, deftly sweeping it over her head without unbuttoning it. She slapped at his hands futilely.

“I’ll gag you,” he warned back. “One scream will have hundreds of demons here to do much worse than change your clothing, princess. After all, you washed off my scent, didn’t you?”

Really? Was he upset because she chose not to wear his—ick—scent?

“Bastard,” she hissed venomously, fingers slapping at his hands still. “I can do it myself!”

But she couldn’t, not when he sat back with his arms crossed, watching her strip for him. Her hands faltered, and she looked away when he stood again, large hands reaching behind her and deftly unsnapping her bra. This time, though, his movements had gentled.

She continued to stare at the wall as he draped one of the so-called dresses over her head, hanging it squarely over her shoulders and looping off her panties in one smooth move.

At least the lace was black, though it was definitely transparent.

She closed her eyes briefly. This was as good as it got. Nipples poked through as if she walked nude. She knew she had to be bright red. This was too humiliating for words.

He held out the nude body stocking she’d tossed into the “I refuse to try these on category.” He pulled the black nothing from her, shimmied the nude one-piece over her head, deftly covering her body parts, then slid the flowing black dress back over her.

Tentatively she looked in the mirror. Not bad. In fact, she looked good. It was the illusion of nudity rather than all out showing—and it gave her a mysterious air.

“Ace,” she said, her happiness barely contained. “You did it. This is perfect.”

“Layers,” she repeated, spinning in the mirror. Impulsively she reached up to the green-horned demon and kissed him square on the lips.

Lust swept through the dressing room from the tips of her fingers to the tops of her toes. Ace instantly hardened, and his erection pressed insistently against her belly.

His hands snaked around her waist, yanking her even closer to him. His tongue was in her mouth and she kissed back for all she was worth.

Damn. It was her kiss. She had triggered the atmospheric change with her kiss. It was easier to let loose here, in this land. 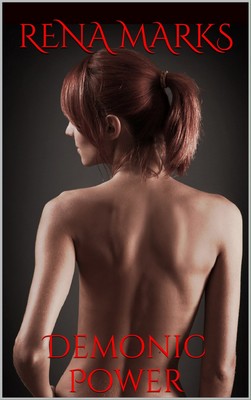