Alien abductions are real and now I’m stranded on the planet Blaedonia.

I was the fourth female awakened aboard the Drurian spacecraft that specialized in kidnapping females. Their mission? To sell us to other galaxies.

Human female Numbers One and Two didn’t make it, but Niki—also known as Number Three—made it through the experimentation of language implantation. I was lucky and she transferred the gift of languages to me. I’m now able to understand the sexy, blue barbarians who have taken us in on their planet.

Now, Niki has mated to the King—Drakar—who has decided to mate me to his best friend Rayhaan. Apparently the barbarians are clueless to the fact that Earthlings choose their own men.

Lucky for me, I have an opportunity to travel home. Unlucky for Rayhaan, he’s forced to do my bidding to woo me.

Because now, a girl has options.

The spaceship is crashing.

A computer’s voice drags over the loudspeakers, warning of a bumpy landing. The aliens around the table where I lay snap to attention as the lights flicker and go out, and when it’s dark, I’m dragged away, butt-naked. My arms and legs flail, but I’m careful to heed the warning from Niki and Drakar, two other caged abductees. They warned me that one of the aliens nicknamed Lech is allowed to rape anyone who screams. Apparently, the pitch in a human scream hurts the aliens’ delicate—little—eardrums.

So I’m careful not to open my mouth as I’m dragged down the darkened hallway to where the other hibernating human females are kept, and where I’d been awakened from. The emergency lights are the only available lights in the alien spaceship that contains us. The amber bulbs highlight the walls and create a dim pathway as we leave to enter the hallway. Another door swishes open and I’m hauled into the room which houses the humans, and two of the three aliens keep walking through the same room to reach another door. As it opens, I see that the room beyond is the hull of their ship. I file that away for future reference.

“Lock her in the pod,” the boss-alien snaps over his shoulder at Lech, the one who drags me. While the language sounds like a series of bleeps and whistles, I’m able to understand every word, thanks to Niki and her language transference. The whole reason why they awakened me from stasis was to see if she’d be able to transfer the language experiments they’d done on her. The second alien follows him through the second door and it closes shut, leaving me to my fate with Lech.

With the smack of his hand on a switch, an empty pod folds down like a table. The rest of the glass-like pods stand upright, and there are other women frozen inside in a state of stasis.

Lech throws me on top of the pod and holds me down with one arm. He’s fumbling around and then my legs are jerked apart. His weird, two-fingered lobster claw-hand goes over my mouth and then he’s pushing himself inside me. The pain is intense, like liquid fire ripping my insides apart. He’s disgusting as he grunts his pleasure into my ear. The texture of his skin feels slimy and he smells offensive, like rotted meat. His hot, muggy breath blows across my neck and has the faint smell of mothballs. Gray in appearance, his black eyes are oversized in his bulbous head, reminding me of the face of a fly. His mouth is a tiny, flat slit without lips, set in an intense, ugly face. When his head turns, the back is huge, with raw-matter shaped like brains.

The he squeals like a pig, and comes. His filth runs down my leg. But thankfully, when he pulls out, the pain lessens to a dry burn. A myriad of emotions runs through me. Humiliation. Anger. Helplessness. He lifts me easily and pushes me into the pod. It rises to a vertical position, lining up with the others against the wall. As he seals it, all noises are completely blocked with the soundproofing. The pod slowly fills with a sweet-smelling gas.

As I stare him down, he puts his gray junk back into his space suit and pats the bulge once it’s packed away.

Even though he can’t hear, I promise the bastard a slow and painful death.

But in this dream, I’m too brave. He decides to turn and teach me another lesson. He reaches for me again, and magically the glass of the pod falls away. My skin crawls as his cold, deformed hand grabs me around the neck and lifts me again. My feet dangle two feet above the ground.

This time I do scream, and the sound cuts through the night and reverberates off the rock walls of the caves in which we live. The shriek shatters the quiet with rage and pain, and the impotence of shattered innocence.

Footsteps run down the rock corridors. It’s Niki who bursts through the leather door of my cave. She reaches for me, but I’m in too much shock to comprehend anything real. To differentiate between the dream and…the memory.

She grabs me and holds me to her, shushing me gently. I’m shaking and my skin is clammy and cold. It’s over. That’s right. We live here now, along with the people of Blaedonia in a village made from a mountain of caves.

There’s a commotion at the door and it’s her mate Drakar, as he holds his best friend, Rayhaan, back. Rayhaan calls himself my mate but doesn’t understand that I never chose him. It’s why I sleep by myself.

As second queen to the Blaedonian villagers, whatever that means, I have my own cave. Sometimes I wonder if that’s a detriment. Perhaps I’d have less nightmares if I slept with the other girls in the female bunkhouse. It’s not like it’s crowded, I suspect half the girls hop around from nest to nest. Humans are a novelty right now, and there’s nothing like being in demand.

“Shh, Lucie, it’s all right. You’re safe now. You’ll never hurt again,” Niki murmurs. “He’s dead. His carcass picked over by the night creatures that roam the planet. Nothing remains of him, not a bone, not a tooth. He’s nothing. He holds no power.”

Drakar is whispering to Rayhaan at the doorway and I can’t hear what they say.

Eventually, I come to realize I’m rocking furiously against Niki, a silent rhythm that makes no sense, but seems to comfort something deep inside me. As soon as I notice, the rapid rocking slowly calms. Niki still rubs my back and murmurs.

“Do you want to sleep by yourself? Or do you want Rayhaan to come inside?”

Niki understands the importance of this very small aspect. I nod, and she motions toward the door. Drakar steps aside and allows Rayhaan in.

For such a large man—because the barbarians stand at the very least seven feet tall, with their women reaching six feet—Rayhaan slips quietly into my nest, which is a fur-based bed that’s soft, comfy and warm. He pulls me to his broad, blue-skinned chest, and pretty soon it’s just him and me, cuddling. He’s warm and it makes me realize, I’m not. But the Blaedonians are able to adjust their body temperature, whereas humans can’t.

His hand is large, and nearly covers the back of my head where it holds me pressed to him.

Wrapped so carefully in his arms, I feel protected and safe. 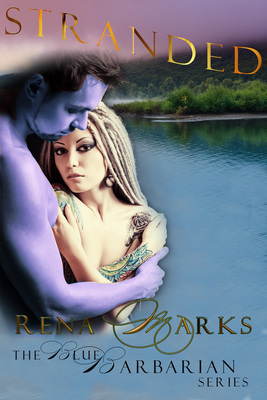